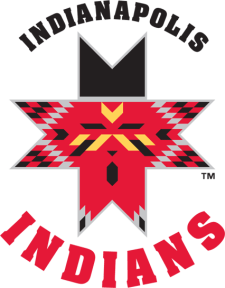 The Indianapolis Indians are a Minor League Baseball team of the International League and the Triple-A affiliate of the Pittsburgh Pirates. They play their home games at Victory Field in downtown Indianapolis, Indiana. The team's mascot is Rowdie the Bear.

Founded in 1902, the Indianapolis Indians are the second-oldest minor league franchise in American professional baseball (after the Rochester Red Wings). The 1902 and 1948 Indians were recognized as being among the 100 greatest minor league teams of all time.

The first attempt at professional baseball in Indianapolis came in 1878, when a club called the Indianapolis Blues operated in the National League. After a hiatus, organized baseball began again in 1887, and the city has hosted professional baseball nearly every year since then. After 15 years of various franchises competing in various leagues (including four years in the National League and one year in the major league American Association), the current Indianapolis Indians franchise was founded as an original member of the minor league American Association in 1902. That year's team won 95 games and the first of 21 pennants.

The ballclub played its early seasons at several ballparks, including two on Washington Street, before Norm Perry, who took ownership of the team in 1929, built a new stadium on 16th Street in 1931, the Indians playing their first game there on September 5, 1931. He named the park Perry Stadium in honor of his brother James who had been killed in a plane crash. That ballpark was renamed Victory Field in 1942, and Bush Stadium in 1967, and remained the Tribe's home until July 1996.

Norm Perry sold the team to Frank E. McKinney and Donie Bush in December 1941. Those two men ran the club for 10 seasons.

The Cleveland Indians purchased the team in 1952, but after losing $500,000 on the operation over four seasons, looked to move the team. The Indianapolis community rallied to save the Indians. Funeral director Robert E. Kirby, chairman of the Indianapolis Chamber of Commerce Athletic Committee, obtained an option to purchase the franchise from Cleveland. A broad-based sale of stock in the team was organized. Stock was priced at $10 per share with a 100-share limit on individual purchases.

Kirby, William R. Kraft, David M. Lewis, Thomas A. Moynahan, and Thomas J. O'Brien got the ball rolling with investments of $200 each, and the certificate of incorporation for Indians, Inc. was received from the state of Indiana on November 9, 1955.

So successful was the drive that the original 16,000-share purchase authorization of capital stock was increased to 25,000 shares by the Secretary of State on December 5 following stockholder approval on November 30. Eventually the new corporation stopped accepting investments in February 1956 after a total of 20,488 shares had been purchased by 6,672 investors. Former Indians player, manager, and owner Donie Bush was named the first president of Indians, Inc. He held that position until January 1969.

In 1956, the Indianapolis Indians were 92–62. On May 18, they defeated the Louisville Colonels 24–0. The Indians went on to win the 1956 Junior World Series by defeating the Rochester Red Wings. In Game 2 of the Junior World Series, Roger Maris set a record by getting seven RBIs.

Max Schumacher joined the Indians front office as ticket manager in 1957. He added the duties of publicity director in 1959, and became the club's general manager in 1961—a post he held through 1997. Max was also named the team's president in 1969 following Bush's retirement. He is currently president emeritus of the board of Indians, Inc.

The Indians had been affiliated with several Major League clubs over the years including Cincinnati (1939–41, 1961), Boston Braves (1946–47), Pittsburgh (1948–1951), Cleveland (1952–1956), Philadelphia (1960) and the Chicago White Sox (1962–67). Beginning in 1968 they had a working agreement with the Cincinnati Reds that lasted through 1983. In addition to four first-place finishes and one playoff championship in that time period, Indianapolis fans saw numerous members of "The Big Red Machine" come through town. Players such as Pedro Borbón, Bernie Carbo, Dave Concepción, Dan Driessen, George Foster, Ken Griffey, Ray Knight, and Hal McRae all donned Tribe uniforms.

The most glorious run in team history came in the 1980s after the team affiliated with the Montreal Expos. In a six-year period (1984–1989), the Indians won four division titles, four straight league championships (1986–1989) and two consecutive Triple-A Classic playoffs (1988–1989) over the champions of the International League. Delino DeShields, Andrés Galarraga, Marquis Grissom, Randy Johnson, Razor Shines, and Larry Walker played for Indianapolis during those years.

The Indians affiliated again with Cincinnati from 1993 to 1999, during which time the team won two more pennants and a league championship (1994). In 1998, Triple-A baseball expanded to 30 teams and consolidated into two leagues, with the Indians returning to the International League. After becoming the top affiliate of the Milwaukee Brewers in 2000, the Indians won the league championship and went on to capture the Triple-A World Series in Las Vegas. But sub-.500 finishes during the next four seasons prompted the Indians to break from the Brewers and join the Pittsburgh Pirates farm system for the first time since 1951.

Perhaps the most significant change in Indians history came in 1996 when the team moved downtown to a new ballpark. Taking a name from the past, Victory Field, an $18 million project on the west side of downtown and part of White River State Park, opened on July 11, 1996, as the Tribe hosted the Oklahoma City 89ers. The open-air facility features 13,500 permanent seats and a lawn berm around the outfield that can seat up to 2,000 additional fans. The park also features 29 luxury suites. The ballpark was designed by the same architectural firm that designed Baltimore's Camden Yards and Cleveland's Jacobs Field.

The opening of Victory Field took the Indianapolis Indians to a new level. Attendance nearly doubled with more than 600,000 fans coming to the ballpark in each of the first five full seasons. In January 1999, Baseball America dubbed Victory Field "the best minor league ballpark in America." Those accolades were reinforced in 2001 by Sports Illustrated and minorleaguenews.com.

The national commendations and record attendance marks earned the Indians a share of the national spotlight. On July 11, 2001, representatives from all 30 Triple-A teams came to Indianapolis, and a national TV audience watched on ESPN2 as the Triple-A All-Star Game took place in front of a sellout crowd of 15,868.

In 2017, the Indians led all of Minor League Baseball in total attendance with 641,141 fans visiting Victory Field during the regular season.

In 2021, the Indians and Pittsburgh Pirates extended their agreement of affiliation through the 2030 season. In conjunction with Major League Baseball's restructuring of Minor League Baseball in 2021, the Indians were organized into the Triple-A East. Indianapolis ended the season in fourth place in the Midwestern Division with a 57–62 record. No playoffs were held to determine a league champion; instead, the team with the best regular-season record was the declared the winner. However, 10 games that had been postponed from the start of the season were reinserted into the schedule as a postseason tournament called the Triple-A Final Stretch in which all 30 Triple-A clubs competed for the highest winning percentage over that stretch. The Indians finished the tournament tied for 18th place with a 4–5 record. In 2022, the Triple-A East became known as the International League, the name historically used by the regional circuit prior to the 2021 reorganization.